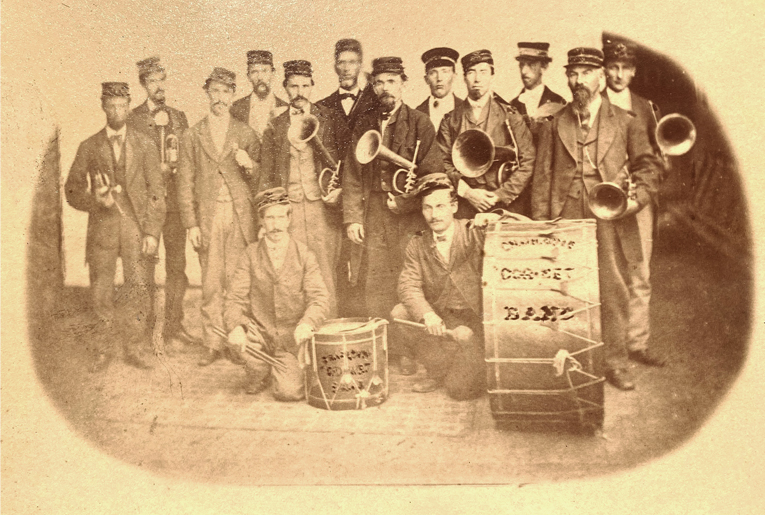 Burlington Free Press, January 14, 1873, "The Charlotte Cornet Band which has not been playing for a year past was re-organized Jan. 4th, with seventeen members, and the following officers: Geo. Foot, president and treasurer; O.H. Alexander, leader; M. Williams, second leader; F.R. Hill, secretary; C. Lewis, director. The band has been in operation for seven years." [note for Ric, the punctuation and abbreviations within the quotation marks are as they appeared in the newspaper]   The men referred to were George Alexander Foote, Orson H. Alexander, Myron N. Williams, Frank R. Hill, and Carlisle Lewis. Most town bands were formed shortly after the Civil War, where the soldiers came to enjoy the brass music. Myron and Frank were members of Company I of the Fourteenth Vermont regiment and veterans of the Battle of Gettysburg. 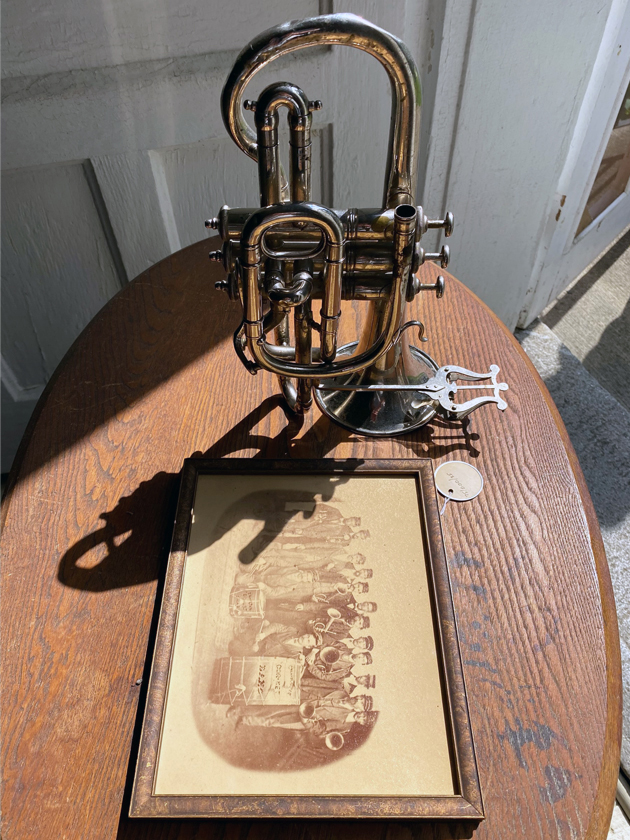 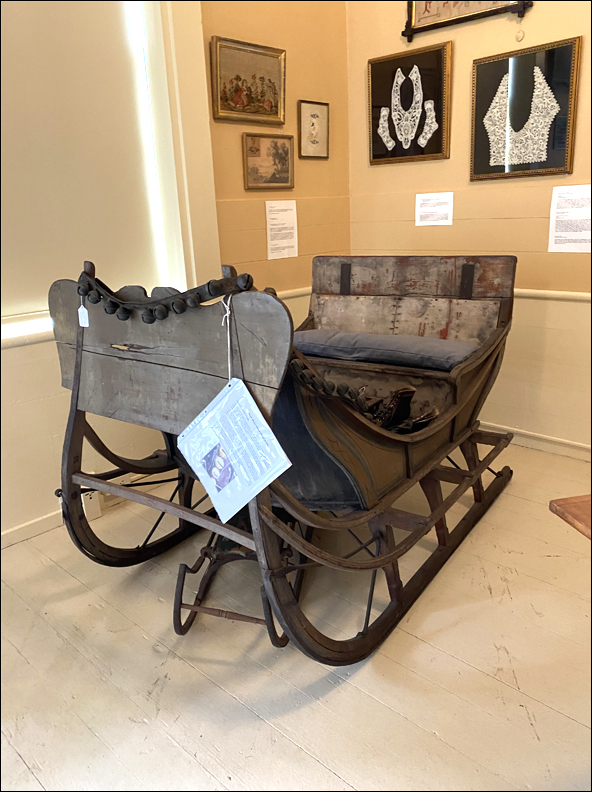 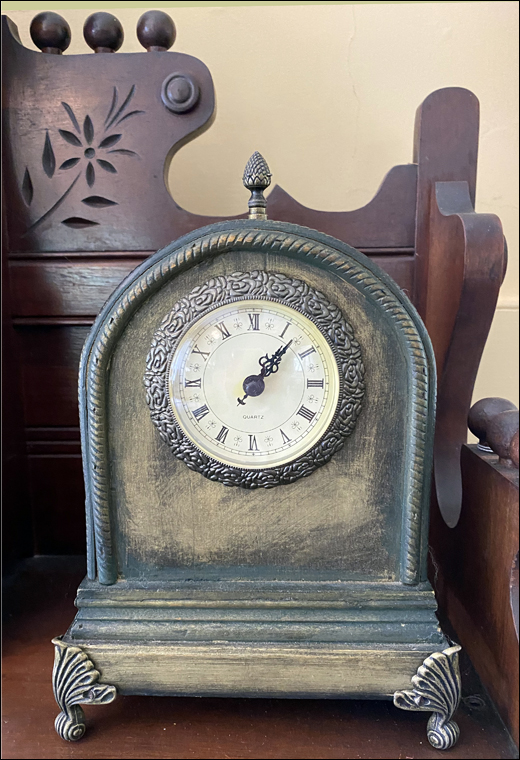 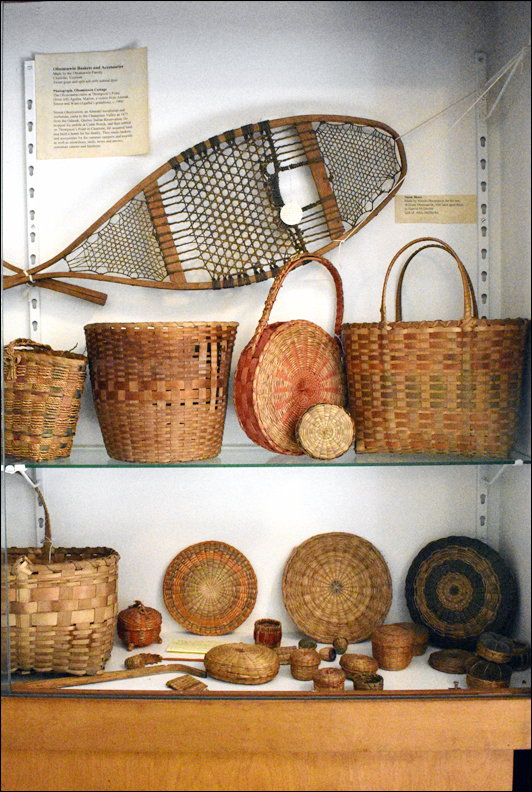 Obomsawin Baskets and Accessories
Made by the Obomsawin Family
Charlotte, VT
Sweet grass and split ash with natural dyes

Simon Obomsawin, an Abenaki woodsman and craftsman, came to the Champlain Valley in 1875 from the Odanak, Quebec Indian Reservation. He stopped for a while at Cedar Beach, and then settled on Thompson’s Point in Charlotte. He acquired land and built a home for his family. They made baskets and accessories for the summer campers and tourists as well as snowshoes, sleds, bows and arrows, miniature canoes and furniture. 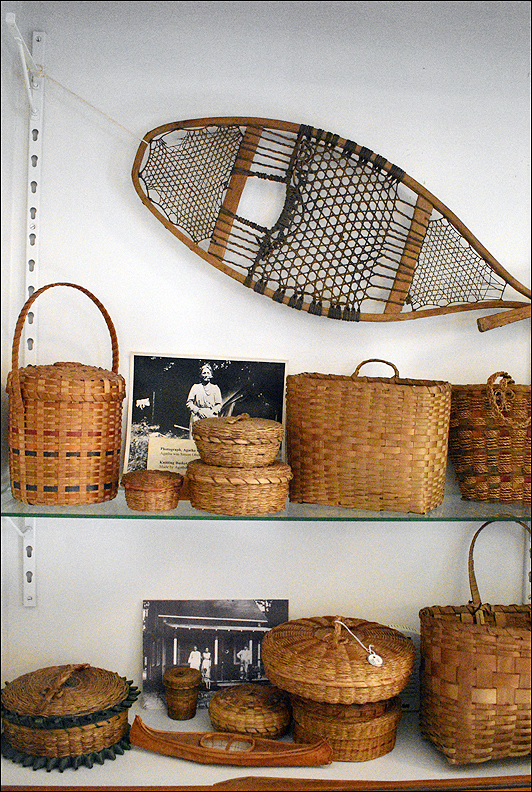 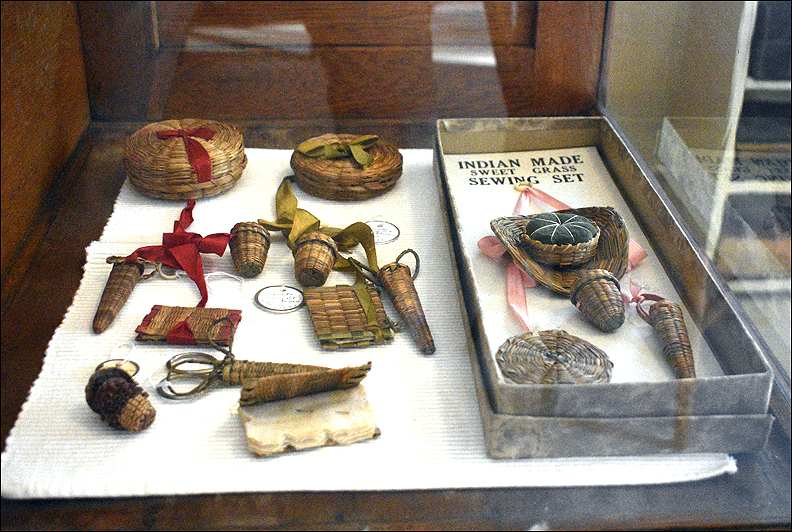 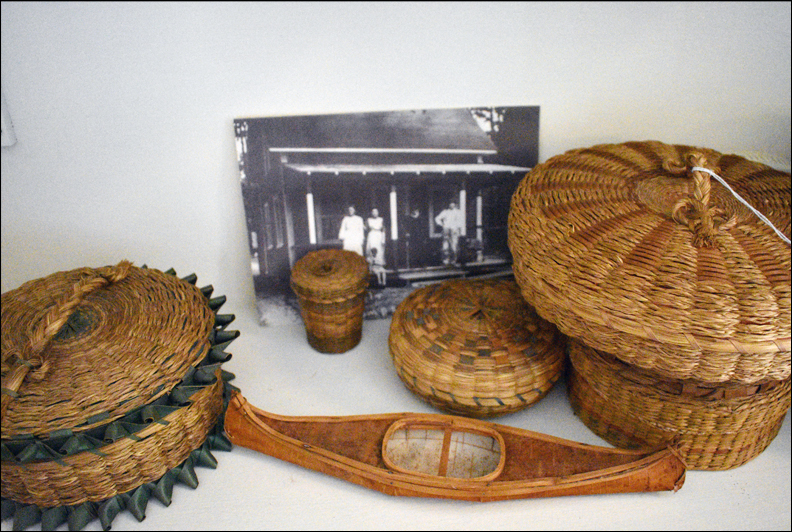 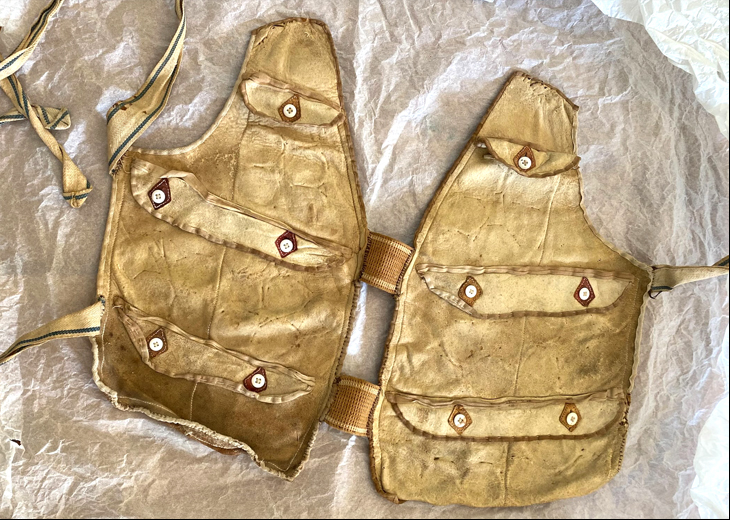 This vest was the property of Alfred Anson Byington.
In February 1853 he travelled by steerage on the ship 'Georgia' to California. After some years of hard work and with savings amounting to several thousand dollars, he prepared to return home. The money which was in gold pieces was sewed into this chamois vest which he wore under his clothing.
This vest is loaned to the Charlotte Museum by his daughters, Anna and Ethel Byington. 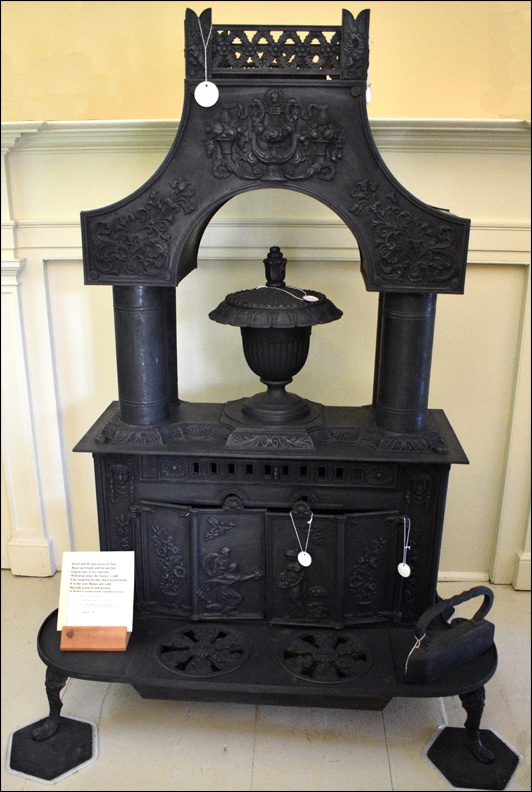 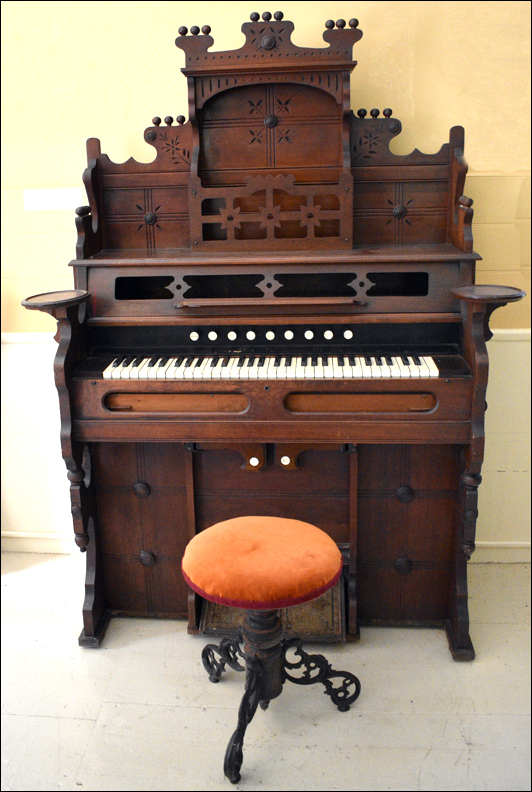 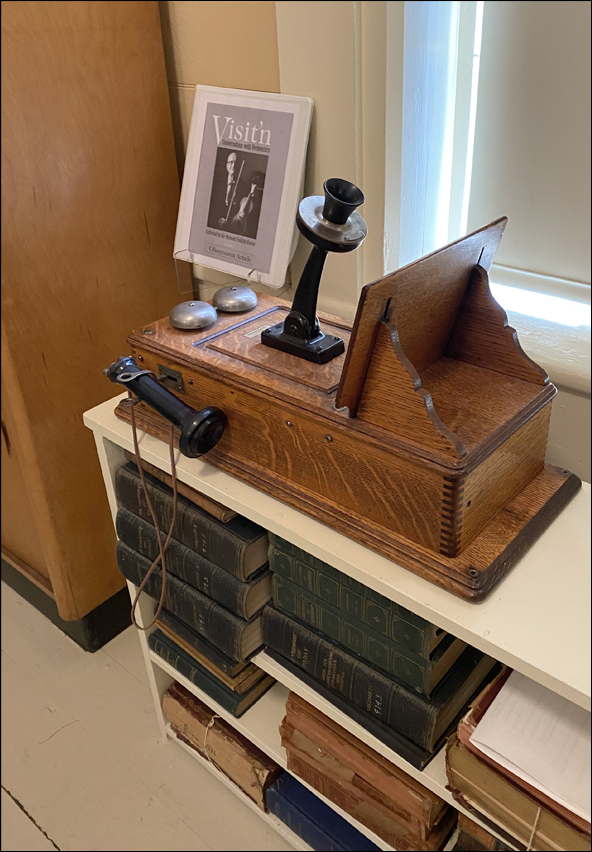 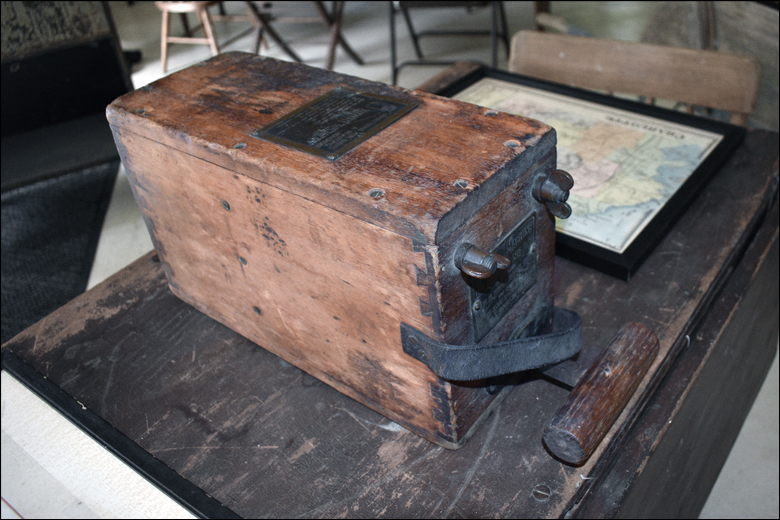 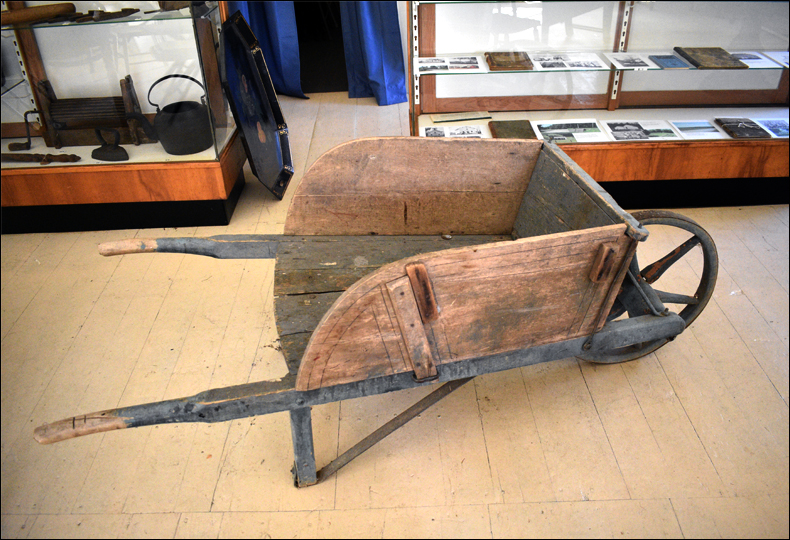 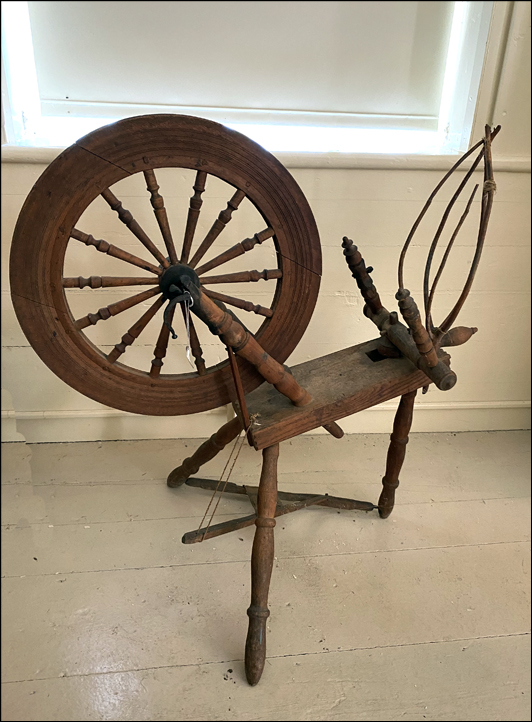 Spinning Wheel-
With yard winder and yarn braider
Donated by the Estate of Cyrus G. Pringle 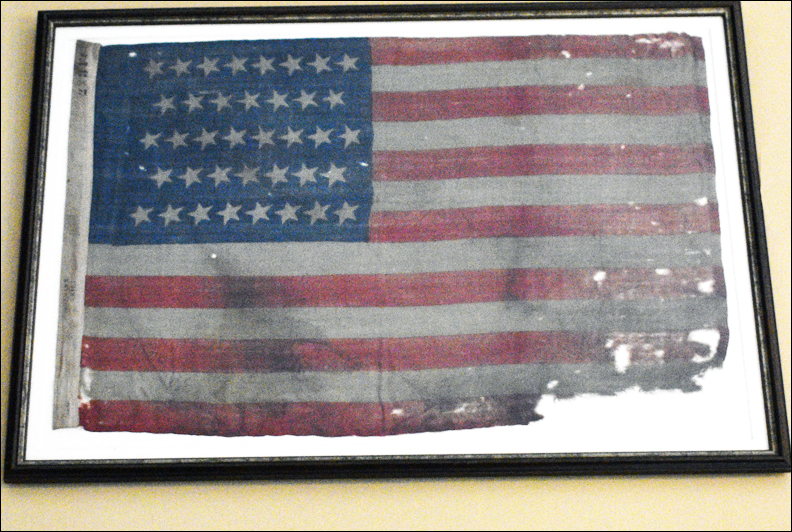 The flag was flown for many years at the Big Dock at Cedar Beach, and it was the responsibility of an appointed young member of the Pease Family to raise and lower the flag during July and August.
Having 38 stars, it dates between 1877 (Colorado) and 1890 (North Dakota).